THE ELITES: RUMORS ABOUT WHO RUNS THINGS

"Wait a minute! What's your idea about who runs things?"
from The Victim, by Saul Bellow

I do not remember when the word "elite" entered the lexicon of political terms. Journalists and pundits use it often to describe a class of Americans who "run things," who have special privileges and influence, sometimes far apart from public opinion—making things happen behind the scenes.

They usually provide money, sometimes surreptitiously, and often evolve into old-boy networks that can thrwart a political mandate or promote an unpopular one. Nowadays, the term "elite" comes almost exclusively with a negative frame of reference.

Wikipedia's article on the elites states the negative view pretty well—that the elites give off an aura of royalty with a dubious reputation. Wikipedia quotes from The Power Elite, published by the left-wing sociologist C. Wright Mills in 1956:

Youthful upper-class members attend prominent prep schools, which not only open doors to such elite universities as Harvard    (and) Yale, but also to the universities highly exclusvie clubs. The memberships in turn rave the way to the prominent social clubs located in all major cities and serving as sites for important business contacts.

Mills says nothing about the intense competition for placement in the best universities. Harvard and Yale, for example, currently accept just 4% and 5% respectively; and they aren't even the most competitive. When I applied to colleges, years ago, I remember reading that Amherst was the hardest to get into—just 16% acceptance.

If they will answer honestly, most colleges will admit they try to get the very best students: more Nobel Prize winners, more Cabinet members, and professorships. Generations of hard work by college administrators and professors have gone into making these institutions as good as they are, not social position or wealth. Both groups work under a fair amount of pressure to make it even better. They will lose their jobs if they do not keep pace with the expectations.

I remember another term years ago, "movers and shakers," that described people who got things done—creating civic organizations, improving city services, directing bureaucratic reshuffling. The term usually had a good connotation, often in a high-society context, and stood apart from politics for the most part.

The spectre of elitism, on the other hand, causes fear in average Americans who lack the sophistication to see past the panicky, tendentious newspaper headlines. For them, the American experience has become a bus-ride from Hell, along the lines of the movie Speed, the elitists driving it by remote-control—careening down mountain roads and never stopping.

From the movie Speed, released in 1994, starring Sandra Bullock and Dennis Hopper

Hollywood has been making films about runaway trains, buses, cars, and airplanes for years. Usually the viewer knows beforehand why the vehicle gets out of control—mechanical failure, human sabotage, vengeful ghosts, or alien-interference. In some cases, the cast of players stop the careening vehicle in time. Other times, all they can do is jump out.  So why not do a movie about average Americans on a bus driven by the elites? Time for us to get a grip on our fears and demystify the issue a bit.

Suspicion about the elites worries some of the smartest people in the country. Here are a few examples of the hysteria Americans have to deal with: 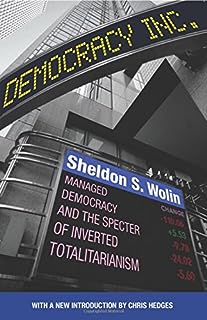 1. The late Sheldon Wolin, a prominent left-wing professor at Princeton University, published Democracy Inc. in 2008. Wolin writes about the influence of "elite contempt" in Chapter Nine: "Intellectual Elites Against Democracy."

2. In The Washington Post: "Why the Power-elite Continues to dominate American Politics" on December 24, 2018.

5. Peter Schweizer, senior-editor at Breitbart News, published Profiles in Corruption: in 2020, complaining about the "Abuse of Power by America's Progressive Elite."

Americans aplenty fear that the elites do not have America's best interests at heart, and may even sabotage the best interests of the nation to benefit themselves, or else on behalf of foreign powers. They do their dirty-work in sheltered anonymity, protected by wealth and social networks. Let's be honst that much of the stress in America today gets its energy and angst from the political camps--Republicans mistrustful of Democrats and versa versa--whose elites supposedly manipulate right-wing voters on behalf of left-wing interests or visa versa. A lot of the time, the accusers don't blame the tangibles, people, ethnic groups, or even a political philosophy. The elites remain anonymous and threatening.

Of course, defaming someone by name could cost the accusers serious money. So they blame "the elites," whom they don't know and who may not even exist. Some of the accusers make forthright accusation—Rush Limbaugh and Sean Hannity on the Right, and Cornel West and Rachel Maddow on the Left. They are the exceptions. They sort of carry the resentment-banner for the rest of us, whet our thirst for payback, and define the opposing sides. I hope they have plenty of life insurance.

Americans need to wake up and realize we have a terminal condition. It is folly to continue like this—a nation divided against itself. We cannot last under these circumstances. It is the perfect set-up for the straw that broke the camel's back. Right-wing straw, left-wing straw, it's still straw—heavy enough to cause serious hurt to America's fitness.

Payback against the elites runs into a problem. The Founding Fathers who brought forth on our continent a new nation were all elitists. Washington, John Adams, Alexander Hamilton, John Jay, and James Madison were all elitists—engineers behind the Constitutional Convention and leaders in the nation's first years of operation. They did not trust democracy the way modern Americans trust it. They judged democracy arbitrary, volatile, and untrustworthy.

The historian Joseph Ellis writes that "Madison's critical assessment" was that "political popularity generated a toxic chemistry of appeasement and demagoguery that privileged popular whim and short-term interests at the expense of long-term public interest."

Although many Americans associate the elites with wealth concentrations and their misuse of power, Ellis writes that Hamilton had "confidence that the concentration of political and economic power was a dynamic force, a synergistic fusion of developmental energies." This is really just a fancy way of saying that unity works better than disunity, as an economic and political force.

The Founders created a centralized United States in the face of opposition from the broader public. Ellis writes, "The vast majority of citizens had no interest in American nationhood." Citizenship meant more to them in the context of the individual States where they lived.

The Founders created America's national and legal character despite these factors and designed it from the "top-down. (A) small group of prominent leaders, in disregard to popular opinion, carried the American story in a new direction." The first-generation elite-Americans in action.

I am troubled that continuing media reports demonize elites as America's clandestine leadership-class operating behind the scenes in order to hijack or undermine the electoral process and make self-servicing decisions that affect the rest of us. Detached from us and insensitive to our needs, they have taken a lot of heat in the media of both political parties for years.

The Democrats griped about the right-wing elites during the presidency of George W. Bush, after the Electoral College "stole" the 2001 election from Democrat Albert Gore. The momentum kept Democratic resentment alive even after Barack Obama became President.

Republicans, in turn, complained about the liberal elites during the Obama administration—scared by Obama's vow to make "fundamental changes" in the character and function of the US. Then Democrat resentment came alive again after Obama's tenure ended and Donald Trump "stole" the 2016 election, again through the Electoral College.

So most Americans have become sensitized to the power of corporate and bureaucratic elites. Hopefully they have the presence of mind and a few idle hours to sift through the billowing smoke to search of fire. It should be hard to find—lots of smoke, just two matches worth of real fire.

Americans should also recognize, by now, the media's tendency to magnify news out of proportion. Recent offenders include Anand Giridharadas, whose story "How America's Elites Lost Their Grip" appeared in Time magazine; Chris Hayes, whose book Twilight of the Elites: America After Meritocracy, appeared in 2012; sociologist Timothy Gill, and others—complaining non-stop about America's power elites. In most cases, the possessors of power in America, the elites, did not scheme their way to power. The power came to them for their expertise and reliability.

Often, a corporation or government agency had to lure them away from their former job by offering increased pay and privileges. Organizations, businesses, and agencies search endlessly for talent to do a particular job. The elites arrive at their station in life, driven by an obsessive work-ethic, rather than nepotism or political connections. They perform their jobs with a high degree of intentionality.

Being an elite comes with a few perks, and we should not begrudge them. They work hard, they offer an important service, namely a high degree of competence in a professional field. Their employers provide all the perks they can to keep the elites happy with their station in life. In other words, their superiors want them to stay on.